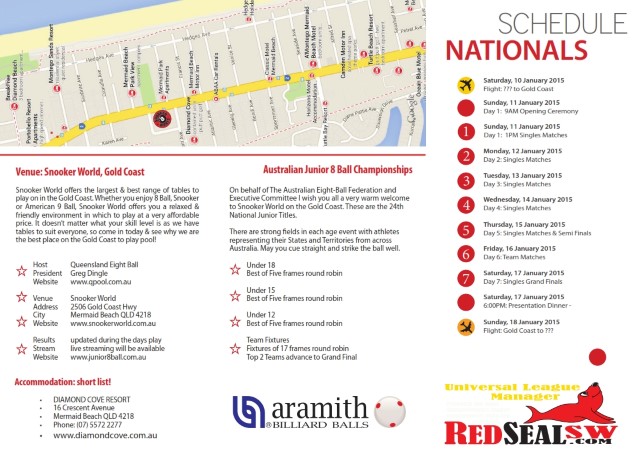 After 6 days of amazing pool showcased at the 2016 Junior National 8 Ball Championships, hosted by the WA 8 Ball Federation at their brilliant air-conditioned & fully catered headquarters in Queens Park, I share an overview of the event in this album, enjoy!

WA’s eightball president Terry Green, his Junior development officer Jeremy Bower with committee & volunteers provided a perfect platform for the Australian 8 Ball Federation to stage their Nationals this year, held at their speccy sporting facility. Andrew Saltmarsh, Greg Dingle & JJ Spinks co ordinated the tournament & provided a live stream of matches. Greg Dingle & Lance Ryan also headed up a solid core of umpires seeing every match refereed. The AEBF & their team had the championships run smoothly & in a timely manner, congratulations on a grand effort from them all!

The event as always was supported & sponsored by CL&S, the providers of Mitchell Straughan Cloth & Aramith Balls & Ray Atwell joined the President of the AEBF Joe Fanto with Cheryl Congram for the awards ceremony to present the Champions. Special mention & thanks to the incredible Chezza for raising almost $5000 to help the juniors with their World Title expenses, she volunteered her fundraising efforts all week, a massive credit to her!

This is how the results panned out:

A MASSIVE Congratulations goes out to every one of the Juniors who played their hearts out & showed just how solid the World Rules Game of 8 Ball is here in Aussie, with these super talented youngens coming up through the ranks it’s not a wonder the Aussies are the current World Champs!! Good Luck & congrats to this years Australian team, Matt Curwood, Alex Pace, Cooper Denmen, Stone Stenhouse, Alex Kingsbury & Hayden Gunn, in their efforts to defend their title at the World later this year.

A quick mention also to the dedicated & hardworking team managers who ensured that their players every need was catered for & kept their teams spirits up with endless encouragement & support, awesome work!

And also to the the Bar & Kitchen crews that kept everyone well fed & watered the entire week.

All in all, the 2016 Junior Championships a resounding success & one that WA can be proud to have hosted.

Thanks for the entertainment boys & girls, I enjoyed capturing you all in action & look forward to seeing you all around the tables for years to come :-)